Dean Russell is an active trail runner, climber, mountaineer and trekker with over 16 years experience in the mountains. Usually found running in his local mountains in North Wales he can also be found guiding Thistle Trekking long distance walks around the UK. If you would like to keep up with Dean’s adventures you can follow him on Instagram.

Being fortunate enough to live on the outskirts of Snowdonia’s national park there are numerous well travelled, iconic and spectacular walks a short distance from the colourful, bustling village of Llanberis. For me what makes a walk special are the great views, a sense of remoteness and terrain where you can appreciate the landscape in front of you throughout and not just the ground below your feet!

Moel Eilio and its two subsidiary peaks is a spectacular circular walk from the village centre offering some of the finest views in Snowdonia. In numbers this walk is 13.6km (8.5 miles) long and includes 803m of height gain. With the highest peak reaching only 726m, compared to the 15 Snowdon Giants reaching over 3000 feet (914m), they can sometimes look a little small. Don’t let this put you off though as being low has its benefits in Wales; they remain below the cloud most of the time, even when the higher peaks are wreathed in mist, and therefore give good views in most conditions. Nestled alongside the Snowdon giants gives this walk a mountainous feel, and the terrain allows you to fully take in the grandest of vista.

Llanberis has a long history of climbing. Local legends such as Joe Brown pushed the boundaries of climbing nationally and internationally. Pete’s Eats has long been part of climbing folklore and what better place to start your day. I recommend a pint of tea and one of their famous grand breakfasts. You will not leave hungry. From the village centre follow signs for the Slate Way which leads you through the backstreets of Llanberis up steep roads. The view of Moel Eilio opens up in front of you as you leave the village behind. Before long the road ends and joins a bridleway that traverses under Moel Eilio, it passes through a couple of gates but is always obvious. 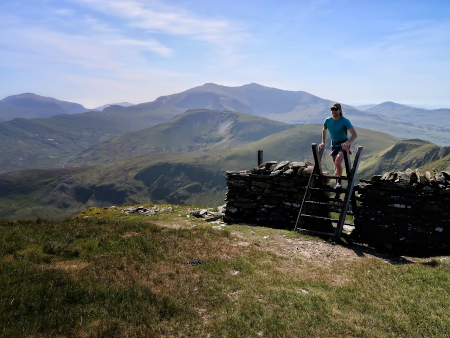 When you arrive at Bwlch-y-groes a wide obvious path leads left and up towards the summit of Moel Eilio. The ascent is steady to begin with but as you join a fence with the path on its left hand side it starts to steepen. Follow this path to the summit where spectacular views await over the Nantlle ridge to your right, the Snowdon massif in front of you, the Glyderau to the left and don’t forget to look backwards and marvel at the views out to the Menai Straits, Anglesey and the Irish Sea. I’ve spent many an hour enjoying the views which are arguably the best in the whole of Snowdonia National Park.

The geology of the three mountains you traverse during the walk are synonymous with glacial activity in Snowdonia with two distinct faces, grassy slopes facing south-west and steep craggy ones facing north-east. This is a product of how the rocks responded to glacial scouring in the late Ice Age that ended some 10,000 years ago and is clearly visible as you continue the route over the grassy ridge that makes up the Cwm surrounding Llyn Dwythwch.

Heading towards the unmistakable Snowdon massif the walks crosses the subsidiary peaks of Foel Gron and Foel Goch. After passing Foel Goch you descend steeply down for a short while to Bwlch Maesgwm and onto a well maintained bridleway that is followed for about 3km towards Llanberis. It’s possible to continue on the bridleway all the way back into Llanberis but its worth taking the small path over Afon Arddu instead. Before the bridleway crosses over Afon Hwch head South East on a good path that then crosses the river and follows it downstream before crossing the Snowdon train line. Continue on the path to the road where you will find yourself back with the masses as they descend from Snowdon’s summit via the Llanberis path. Walk steeply down the road until it crosses over a cattle grid that brings you to the outskirts of Llanberis. To get back to the village centre and a well deserved drink at one of the many local establishments you just need to follow signs for the village centre.

If you are interested in a guided walk on this or any other walks, hikes and treks in our ‘Favourite Walks’ series just get in touch with us by email, phone or through our social media pages. contact@thistletrekking.co.uk